History of the Ilizarovs wire-fixator, stages of hand surgery development at the Ilizarov Center 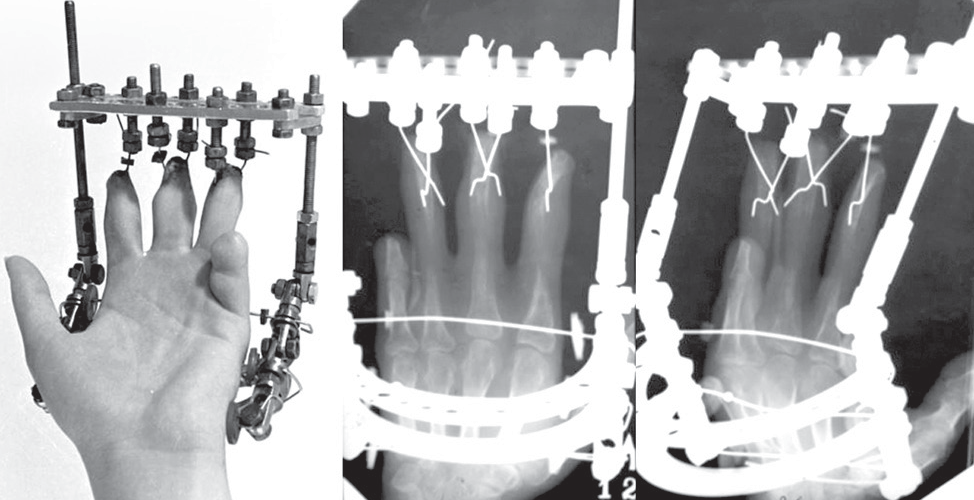 G.A. Ilizarov. Methods The process of creation and development of transosseous osteosynthesis for short tubular bones was analyzed. We present the main designs and developers of the inventions related to extrafocal osteosynthesis of hand bones. The structural divisions of the Ilizarov Center, in which medical care was provided to the patients with hand pathology, were stated. Results The entire existence and active use of the Ilizarov mini-fixator can be represented by five periods, starting from the period of comprehending the need for its design. Currently, we are in the period of its combined use in conjunction with the reconstruction of hand soft tissues. Conclusion The names of scientists who have made a significant contribution to the development of the Ilizarov method of transosseous osteosynthesis for the hand surgery were given in the final summary. Thanks to the results of their work, we have the opportunity to further develop hand surgery in accordance with the contemporary scientific requirements.

The Russian history of surgery also has many vivid examples of in-depth study of hand pathology. And here we need to start with the activities of the outstanding physician N.I. Pirogov (1810–1881),

who laid down the basic principles of traumatology, orthopedics and surgery [2]. His initiatives were picked up by his disciples. Yu.K. Shimanovsky (1829–1868), in addition to various interventions on integumentary tissues, proposed a method of stretching the skin on amputation stumps [3].

Purpose To analyze the stages of development and application of transosseous osteosynthesis for short bones proposed by academician G.A. Ilizarov.

The history of any scientific direction is closely and inextricably linked to the people who plan, build and implement this direction in life. The history of the development of the “hand” part of the method of transosseous osteosynthesis at the Ilizarov Center

was no exception. We should start from the very beginning.

country, but throughout the world. The main attention of scientists at that time was concentrated on the development of reconstructive and restorative operations on large segments of the human musculoskeletal system. In 1966 G.A. Ilizarov, after creating an external apparatus of his own design, was appointed head of the problem laboratory at the Sverdlovsk Scientific Research Institute for Traumatology and Orthopedics. At that time, the Ilizarov method of transosseous osteosynthesis began its development and subsequent practical application.

The decision to use transosseous osteosynthesis in hand surgery was not accidental. On the one hand,

G.A. Ilizarov discussed the possibility of using the developed method in related specialties such as angiology, oncology, neurosurgery, dentistry and other disciplines. On the other hand, his fame served as the starting point that attracted patients with hand pathology to refer to the Ilizarov clinic. One of the first patients who underwent treatment with a mini- apparatus was the director of a plant from the city of Kurgan with a fracture of the 5th metatarsal bone. Being admitted to the institute for medical care, he was offered plaster immobilization, which he rejected due to a large amount of bandages, inability to use shoes, and the need to move with crutches. So, a customized and a very miniature assembly of the apparatus for fixing a broken bone was developed. And all the disadvantages of a plaster splint were avoided.

The final decision to speed up the development of a mini-fixator was made after one of the Institute’s employees applied to G.A. Ilizarov to treat her 6-year- old daughter who had brachisyndactyly of the fingers of both hands. Not only orthopedic traumatologists, but also

specialists from the engineering laboratory were invited to the surgical council that discussed the upcoming reconstructive intervention on the hand. According to the terms of a technical solution, the engineers had to develop the main parts of a mini-fixator from which it was possible to assemble the units for the longitudinal and transverse traction. Thus, the referral of patients with injuries, bone defects, congenital anomalies in the hand made the team of doctors headed by G.A. Ilizarov to develop and introduce into practice a design of the fixator for interventions on small tubular bones.

In the following years, the mini-fixator passed through several stages of improvement. The main requirements for the design of the transosseous osteosynthesis apparatus for the hand were its easy assembly in the operating room, financial cost- effectiveness, possibility of multiple use, ability to correct all types of displacement of bone fragments, stability of controlled fixation (compression or distraction), individual application depending on the location of a fracture, preservation of active movements in the adjacent intact joints, minimal damage to the soft tissues of the hand while maintaining blood supply to the fractured bones [7–11].

The following year, the authors proposed a new modification of the apparatus for small tubular bones (patent No. 973115 dated 05/18/81) [13]. The device was intended for fixation and work out of finger joints (Fig. 2).

Those two designs did not find a wide application in practical work but were the foundation for a current design of the Ilizarov mini-fixator.

In 1983, a group of doctors and researchers started to treat patients with congenital developmental anomalies, correct post-traumatic and neurogenic deformities of the hand and foot. It was based at the second orthopedic department of KNIIEKOT for adults (head of the department, Murashko Vasiliy Ivanovich). In August 1983, nurses and junior medical personnel from this department were sent to equip a new department, which was decided to deploy on the second floor of block “B” of the new building of the Center. Among them were Klepinina L.Ya., Katkova R.P., Rechkina N.P., Kataytseva L.P., and others. On December 9, 1983, the department opened its doors to patients. The first head of the new department was

In 1983 G.A. Ilizarov proposed a compression- distraction apparatus for treatment of patients with hand pathology (Inventor’s Certificate 1715333 USSR) [14]. Its design, in comparison with the previous ones, was convenient to use, versatile, i.e. it could be used for various orthopedic and traumatic pathologies of the hand (Fig. 4).

Fig. 4 Diagram of a compression-distraction apparatus for treatment of patients with hand pathology (Inventor’s Certificate 1715333 USSR)